David Martin was a writer and photographer, and later in life, a publisher.  He was a rigorous researcher and investigative writer who exposed the calamity and cost of South African economic and military destabilization in southern Africa in the 1980s.

He marched with Frelimo into the liberated zones of Mozambique in 1973, where he met the Zimbabwean military commander, General Josiah Magama Tongogara, during the last phase of the liberation war.

He was the first journalist to interview the young commanders back from the front in 1978. And he produced the first book on that part of the story, called The Struggle for Zimbabwe: The Chimurenga War (1981).

He was the first journalist to write about the South African invasion of Angola in 1975, and in 1987 at Cuito Cuanavale, and to expose the US Secretary of State Henry Kissinger’s plans for southern Africa in 1976, which were strongly opposed by the Front Line States.

He was the first journalist to expose the detail of Rhodesian and then South African destabilisation of Botswana.

David Martin was a former Africa correspondent of The Observer in London.  During the late 1970s, based in Lusaka for The Observer, he was often quoted in other media, including BBC.

From 1971 to 1974, he ran his own news agency in Dar es Salaam, reporting on the decisive phases of the liberation of Mozambique and Angola. And it was also during this period that he wrote the first articles exposing the atrocities of Idi Amin in Uganda, and the first book on this subject, titled General Amin, published in 1974 and credited by many Ugandans as the first public acknowledgement of their plight, contributing to the momentum that led to Amin’s removal in 1979.

“In post-liberation Southern Africa, it is difficult to think of anyone who knew David or knew about him and his work, who will not be moved by his passage, after a long battle against cancer, and who in the last four years, when not on the operating table or in bed, still continued to travel and to write despite the agony and discomfort attendant to his illness.” wrote his good friend, Benjamin Mkapa,

David Robert Martin was born in the United Kingdom in 1936, the son of a French mother, Laura Louise Sellier, and an English father, Robert Martin, who worked in a capacity that here would have been called a “houseboy”, or butler. The father was a personal assistant and caretaker of a member of the British aristocracy, and travelled the world with his “master” looking after his personal needs.

It was in this master-servant household that David grew up, seeing both sides of the divide, and when he announced that he wanted to be a journalist, he was promptly dispatched by his godfather to take up a more suitable profession of tobacco farming in southern Rhodesia. He failed dismally at this because he could not fit into the racially divided society and did not agree with superiority based on race.

He started his media career in 1959 in the UK at a small weekly newspaper in Devon. He arrived in Dar es Salaam five years later, on 9 January 1964, to take up a position as a reporter on The Tanganyika Standard, in response to an advert in a British newspaper. He had to consult a map to find the location of Tanganyika.

The preparatory briefing he was given before departure was that the new leader who had taken charge of the country at independence two years earlier, Julius Nyerere, was an educated man and an intellectual, “a graduate of Edinburgh University, good chap, almost one of us.”

Tanganyika, he was told, was a quiet place, nothing ever happens there. The Zanzibar revolution erupted three days later, and a few days after that, an army mutiny. A few months later, Tanganyika and Zanzibar joined together to form the United Republic of Tanzania. His life continued in that pattern.

This was a heady time when Dar es Salaam was the liberation headquarters and centre for the liberation movements. The Organisation of African Unity had been established in 1963, and the OAU Liberation Committee was hosted by Tanzania.

David always credited his education to this decade that he spent working in the media in Tanzania in the 1960s, influenced by Mwalimu Nyerere, Benjamin Mkapa who was then editor of the Uhuru newspaper, and others; and the liberation leaders and movements based there, whom he became close to, including Eduardo Mondlane, Samora Machel, Sam Nujoma, and others. 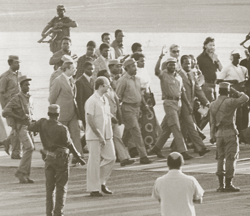 He followed the liberation movement south, and spent a lot of time in Mozambique and Angola in the months during and after their independence from Portugal in 1975.

He was the first journalist to report from the Mozambique border with Southern Rhodesia after the border was closed by President Machel in March 1976.

This was the year of the Anglo-American talks on Zimbabwe and Namibia, and the year that students poured out of South Africa following the Soweto uprising, and David interviewed many of them in Dar es Salaam.

David’s articles appeared as the front page lead story in The Observer, for 16 weeks during 1976, often through briefings from Nyerere, Machel and others, who knew that he would accurately present their views and context, reporting honestly and without distortion.

“Through this connection, of a journalist and of a President [Nyerere], who was also in many ways his teacher, David embraced the African liberation struggle with his characteristic probing mind and commitment,” Mkapa wrote.

President Armando Guebuza described Martin as a “great friend of Mozambique and the people of Mozambique” whose death has robbed us of “his advice and encouragement as we soldier on, building a better and prosperous Mozambique. His tremendous contribution to the region will also be remembered.”

President Mugabe said he was, “A rare type of journalist… whose connection with the freedom struggles in southern Africa mirrored a deep humanity and empathy.”

In Lusaka, he was in close contact with President Kenneth Kaunda and with the liberation movements at the Liberation Centre there, including Joshua Nkomo and ZAPU, as well as SWAPO and the ANC of South Africa.

He covered Namibia’s lengthy struggle for independence up to 1990, and played a unique and long-term role in presenting the African perspective internationally.

Professor Peter H. Katjavivi, Chairman of the Board of the Southern African Research and Documentation Centre (SARDC) and the Ambassador of Namibia in Germany at the time, said, “We salute David Martin for being a true fighter for the liberation and development of a progressive Southern Africa.”

Under the apartheid regime, David’s books were banned from possession in South Africa, reinforcing his belief that knowledge plays an essential role in empowering people.

“The rest as they say is history; 40 years’ history of brave and meritorious service to African liberation.”

David was banned from Southern Rhodesia, but entered Zimbabwe at the start of the transition to independence following the Lancaster House negotiations, establishing his home in Harare with his wife and fellow writer, Phyllis Johnson. At the time of his death, he had completed four new books and was working on a biography of Tongogara.

David Martin was a prolific writer, who spent his life writing books as well as articles, including The Chitepo Assassination (1985); Destructive Engagement: Southern Africa at War (1986, updated 1989); and Apartheid Terrorism: The Destabilization Report (1989).

The Guardian, published in Dar es Salaam, wrote of David Martin that, “… He received information with caution, handled facts with tenderness and advocated with circumspection.” 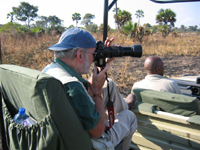 David was also a fine photographer. His retirement project was dedicated to creating better understanding of people and places through tourism, by writing and photographing area-specific, pocket-size Into Africa guidebooks.

He leaves a legacy of 24 guidebooks and photographs, including 16 travel guides to Tanzania National Parks, 2 for Namibia, 1 for Mozambique, and five travel guides for specific areas of Zimbabwe: Hwange, Kariba, Victoria Falls, Bvumba, and Great Zimbabwe. These are small books, not only about wildlife but about the places, the people who inhabit them, and their history.

David also leaves a legacy of institutional development. He was a founder of Zimbabwe Publishing House in 1981, and the Zimbabwe International Book Fair in 1983, bringing the concept of Book Fairs to southern Africa.

He was a co-founder of the Southern African Research and Documentation Centre (SARDC), a regional research centre whose Founding Patron was Mwalimu Nyerere, in 1985; and the Musokotwane Environment Resource Centre for Southern Africa, in 1992. He was a trustee of the Josiah Magama Tongogara Legacy Foundation. 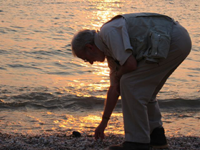 He passed away peacefully at home on 18 August following a long and vigorous struggle with various illnesses and mishaps, over the past three years. Always active, he had two major operations for cancer in 2004 and 2007, as well as two operations in 2006 to repair broken bones in his shoulders, after being airlifted out of Serengeti in northern Tanzania, but he never stopped writing.

The physical challenges of the previous three years failed to deter him and he continued writing up until June this year, when collapsed vertebrae in his back made sitting uncomfortable and affected his respiration, together with the effects of the previous surgery.

David Martin is survived by Phyllis Johnson, his wife of more than 30 years; his son, Tony Martin; and sister, Pam (Robin) Worsley; as well as friends’ children who have spent formative periods of their lives with David and whom he loved dearly. These include Linda Tia Zuze from Zambia; Ozi Dumile and Robert Dick Honwana, and Conor Christie of Mozambique; Tando, Pedzisayi and Rumbi Mudenge; and Chiko and Mati Wade of Zimbabwe. 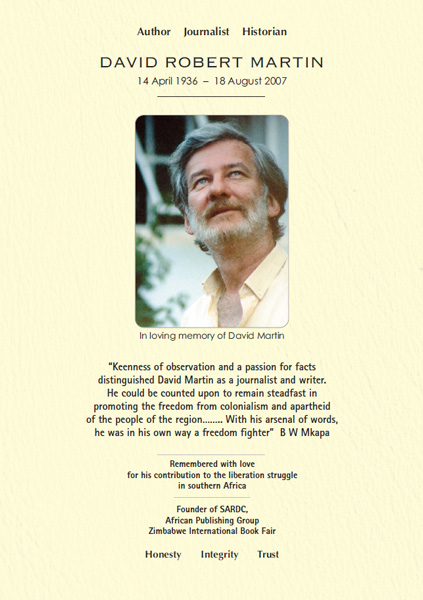